The brilliant but tormented Romantic artist Théodore Géricault (1791 Rouen - 1824 Paris) was a master of lithography. The medium suited Géricault’s artistic needs so well that he would exclusively use this unique printmaking technique throughout the course of his artistic career. From 1817 onwards, lithography allowed Géricault to bring together his aspiration to depict the grand and the natural, especially in his representations of horses and military subjects, two of his lifelong passions.

During his English sojourn of 1820-21, Géricault improved his knowledge of the lithographic technique in the London workshop of Charles Joseph Hullmandel (1789 - London - 1850). The most striking result to come out of this experience was the series of twelve lithographs Various Subjects Drawn from Life and on Stone, known also as The English Set, of which three impressions are included in our display.

Géricault continued his studies of horse once he was back in France, producing the series Etudes, de chevaux lithographiés, from which we present several impressions from the first published issue of 1822, many of them in the rare 2nd state.

Alongside several impressions from different series published during the last years of the artist’s short life, we present the complete series Suite de Huit Petites Pièces; some 1st state impressions from the series Etudes de chevaux, also known as Grands chevaux, some illustrations for Lord Byron’s poems and an impression of Géricault’s best-known painting The Raft of Medusa (Louvre, INV. 4884).

We are pleased to display a total of 55 lithographs by Géricault, more than half of the artist’s lithographic oeuvre according to Delteil’s record. The selection of such a great number of Géricault’s prints is unique in the commercial world. Almost all the lithographs are on full sheets and come from the esteemed collection of Henri Petiet (1894-1980), most of them featuring his initials and inventory number.

In addition to Petiet's collection, we feature an extremely rare early pen lithograph which is the only known impression to so far be attributed to Géricault.

Finally, two portraits of Géricault by his friend and colleague Léon Cogniet offers the perfect addition to our exhibition. 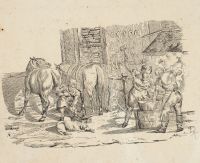 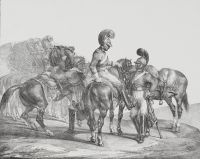 view artwork
previous
page 1 of 7
next
We use cookies to enhance your experience on this website. Find more info here.